You cannot see this page without javascript. 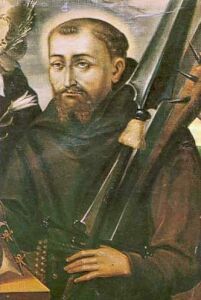 Born at Sigmaringen of prominent family in the principality of Hohenzollern, in the year 1577, St. Fidelis received the name Mark in baptism. He was fortunately endowed both by nature and by grace, so that while he progressed in learning, he made still greater progress in virtue and piety. When he had completed his studies in philosophy and jurisprudence at the University of Freiburg in Breisgau, the parents of several young noblemen were looking for a tutor who would accompany their sons on a tour through the various countries of Europe. The professors at the university drew their attention to Mark, who qualified for the position by his moral as well as by his mental gifts. Mark accepted the position, as a result of which he spent 6 years traveling. To the young men who had been entrusted to him he pointed out, not only everything that was noteworthy from a worldly point of view, but he led them also to the practice of Christian virtue. He himself was to them an exemplary model, since in all the vicissitudes of these 6 years they never saw him get angry.

Upon his return, Mark followed the profession of a lawyer. He was soon much in demand because of his ability. But when he noticed that many lawyers, corrupted by money, did violence to justice, and that an attempt was being made to lure him also into that course, he gave up the dangerous career.

He had an elder brother among the Capuchins; and he, too, joined them in the year 1612. At his investiture he received the name Fidelis, the faithful one, and in his address, the superior applied to him the words of Holy Writ: "Be thou faithful until death, and I will give thee the crown of life." (Apoc 2, 10). The words were destined to be a prophecy concerning the new candidate in the order. After Fidelis had completed his studies in theology and had received holy orders, he preached the word of God with great zeal. Meanwhile, he was a model in all the conventual practices, and evinced such wisdom that a few years later the superiors appointed him guardian.

In this position he strove earnestly to promote in his subjects religious perfection, tolerating no violation of it. But he was stricter with himself in this regard than with any of his brethren; towards all the others he cherished truly maternal solicitude and charity. Whenever the salvation of a soul was concerned, no sacrifice was too great. When he was guardian at Feldkirch, a pestilential disease raged among the soldiers there; at once Father Fidelis betook himself to them and tendered them every possible service.

In the year 1622, the Congregation of the Propaganda, which had just been founded by Pope Gregory XV, established a mission for the Grisons in Switzerland, to check the pernicious inroads of the Calvinists and Zwinglians. Father Fidelis was named the head of this mission. For a long time he had been begging God daily at holy Mass to grant him the grace to shed his blood for the Faith; now his prayer was about to be heard. Since Fidelis had the happiest results from the very first months of his mission activity, the rage of the heretics rose to great heights; his death was resolved upon. Fidelis was so convinced of it that on the morning of April 24th at Sevis he prepared himself for his last moments. Then he mounted the pulpit. During the sermon a band of armed heretics pressed into church. They dragged him down from the pulpit, and inflicted so may blows and cuts on him that he died at their hands.

God almighty glorified His martyr by many miracles, whereupon Pope Benedict XIV solemnly entered his name in the register of saints in 1746.